Music has been the backbone of the cinema experience since Méliès visited the moon. Live pianists acted as soundtrack, from lightheartedly accompanying The Tramp’s adventures, to striking a dagger-like chord in Nosferatu. But The Jazz Singer changed everything as it synchronised the act with the beat. Ingenious filmmakers discovered ever more inspiring ways to wield this new tool, and a new genre of filmmaking was born – the Musical.

Director Rouben Mamoulian was a director known for a varied oeuvre, the horror Dr Jekyll and Mr Hyde, the swashbuckler The Mark Of Zorro, gangster picture City Streets, and very nearly the epic Cleopatra. But his background in theatre and opera paved the way to the highlight of his career – Love Me Tonight. 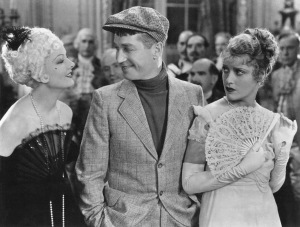 As Mamoulian once stated, ‘musicals must float’ and his camera is the baton guiding the rhythm. Mamoulian’s love for cinematic freedom propagated his combat with sound transition limitations. As other filmmakers became locked down by noisy cameras, Mamoulian invented the Blimp, a box which isolates the camera and unlocks an omniscient eye. A trait which subsequently earned him the title – Master Of The Tracking Shot.

Though the camera movement is strikingly fluid, the narrative efficiency is inspiring. Rodgers and Hart’s magnificent collection of musical numbers are presented in as visually playful a manner as the lyrics, ‘The Song Of A Gun Is Nothing But A Tailor’ sequence moves as visually angered as the lyrics express. But more impressive is removal lingering Big Numbers, and rather focussing on playful songs to further narrative.

For instance, our Hero, humble tailor Maurice (Maurice Chevalier), is a Parisian tailor. Whilst fitting a gentlemen, he hums ‘Isn’t It Romantic’ without much aplomb. The tune tickles the gentlemen’s fancy and he proceeds to hum as he enters a taxi. The tune evolves in scale and sophistication as it passes on and on until finally reaching our heroine, Countess Jeanette (Jeanette MacDonald) angelically singing. A connection is made between lovers without them ever knowing, but for us it informs everything.

A conductor is only as good as his instruments and the high notes emanate from Maurice and MacDonald. Upon arrival at the mansion to collect his debt, Maurice finds two things, the Viscount (Charles Ruggles) is broke, and beautiful Jeanette resides there. Maurice does not hesitate when the Viscount offers a plan to reside at the mansion under the guise of a Duke whilst he obtains the money.

And so begins the opposites attract routine we know so well. Maurice, a cheeky womaniser delighting in teasing with tunes like ‘Mimi’, and the uptight Jeanette sapped of a lust for life. It is difficult to tell whether the adoration pouring between the two is of friendship from previous film collaborations, or a product of singing live on sound stages, allowing Mamoulian to capture fleeting emotions lost later in dubbing.

Providing harmony to the central romance is a cast of characters to fall in love with. Charles Ruggles’ weasel Viscount, C. Aubrey Smith’s crotchety Duke, Charles Butterworth’s hapless aristocrat in love, are beyond fodder to propel or hinder the stars, they are beloved idiosyncrasies. Though Myrna Lloyd’s man hungry Countess Valentine may even steal the show with scenes like –

Jeanette has fainted. Viscount runs in and wakes Countess Valentine.

Viscount: Valentine, could you go for a doctor?

Valentine: Certainly, send him right in.

As Mamoulian once said ‘Realism and Naturalism are not for me. I think it’s too feeble an instrument’. Love Me Tonight is a fairytale, as the Macbethian spinster trio conclude the film by unveiling a knitted muriel of a knight and a princess – ‘Once upon a time there was a princess and a prince charming, who wasn’t a prince, but who was charming’. And they embark on their happily ever after.

Morning wakes in Paris… a man sweeps his porch… a woman beats a dusty carpet… bikes ride by… each noise adds tempo… rhythm… octaves… until the noise harmonises in to a symphony.