The lively Parisian district of Les Halles impressed upon young Rene Clair a picturesque image of Paris he would equally impress upon celluloid. Equipped with a degree in philosophy and the horrors of the front line of World War I, Clair harboured an disparate understanding of man’s capabilities. The far left of proud found thought and the far right of violent atrocity.

Clair imbues duality into the construction of his pictures, lining the base with his particular manifesto and proceeding to layer it in romance, music and laughter. Some may argue his dadaist concerns are ultimately suffocated, but his wondrous entertainment and revelation of unlocking dialogue from image liberated his art to the fantastical cinema we see today. 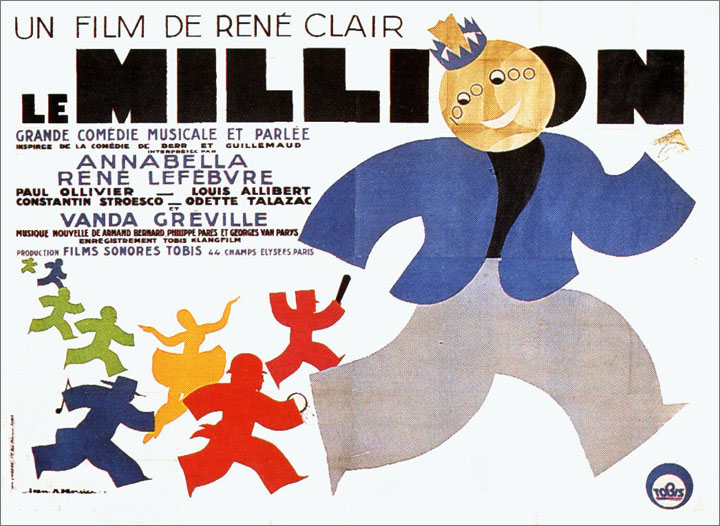 The Million was released in succession with Freedom For Us across a decade of prosperous  French made pictures which earned Clair the title of Auteur alongside Griffith, Chaplin and Pabst. Clair’s ability to resist genre and to bend and squeeze each for their very optimum qualities led to some of the great early screwball comedies, and The Million may be the lightest of them all.

Archaic qualities of Marx Brothers antics, Lubitsch wonder and Mamoulian musicality echo throughout, but Clair deserves a far greater perch alongside the three geniuses Chaplin, Lloyd and Keaton. Clair too is an auteur matching pure entertainment with visual symphony, and ringing with sentimentality. The fourth genius was evidently hidden behind the camera.

The Million follows the farcical adventure of impoverished painter Michel (Rene Lefevre) who must recover his missing jacket containing a winning lottery ticket. Michel is in a race against time through Paris with debt collectors and a jealous friend hot on his heels.

Though the premise of The Million may be more rigid than Clair’s other experimental or dadaist pieces, it is by no means a restriction upon the director’s unique imagination. From beginning to musical end, the picture is a farce of double crossings, chases, romance, greed and comedy. Clair’s true talent lies in discovering or distorting moments in to humorous skits and sequences. In one scene, the much desired jacket is tossed and thrown between a group of men, a scuffle transforms in to a game of rugby.

Films of this masterful calibre and enjoyment are equivalent to a wonderful dream, impossible to communicate the exact sense of warmth and glow imparted, but bestowing a smile none the less. To nit pick a picture of that kind would be villainous and heartbreaking, thankfully, Clair permits no such dilemma.

Michel pursues fuming Beatrice (Annabella) on to the stage, but in the middle of their argument the curtain begins to rise. Without a moment to escape, they duck behind a prop. There they sit, Beatrice resisting Michel after yet another infidelity. But as the opera begins, the words resonate with the lovers and the fall in amour once again, sharing a kiss as petals rain down on the faux bucolic scene. Clair’s blanket of romance can infallibly warm any audience member’s heart.