There was a maxim behind the creation of this bizarre short which is the closest to preparation I can offer. ‘No idea or image that might lend itself to a rational explanation of any kind would be accepted’. Running at fifteen minutes, Un Chien Andalou is the shortest film appearing on the 1001 films and perhaps the strangest. It is born of two dreams from collaborative surrealists Salvador DalÌ and Luis Buñuel; one of ants crawling out of a hand, the other of an eye slicing open. If that does not entice, I do not suggest watching. Or at least, not during dinner.

Unsettling is the first term that comes to mind and various scores attributed make little in the way of levity or gravity. This film is a pure visual conundrum, capturing vignettes of what can only be labeled as madness or dreams, and it flows accordingly. Ideas and locations entwine with the most tenuous of links in what is commonly referred to as Freudian free association. In one scene, the Woman of the piece angrily exits her high rise apartment, only to turn and reveal the hallway is linked to the beach. Logic is discarded, but this artistic choice unlocks the power of cinema to warp and create impossible environments at the whim of the filmmaker.

Time works much the same way. Few title cards are used, of which none are dialogue, and furthers a disturbing undercurrent. ‘Eight years later’, ‘Three years later’, ‘In spring’. These disjointed and unprompted intermissions exhibit no change and prohibit Un Chien Andalou from daring enter a semblance of a comfortable viewing. Interestingly, Buñuel’s commencing title card reads – ‘Once Upon A Time’, either setting a fairytale ambience for what follows or a macabre joke at the distance it takes from childhood fantasy.

By discarding time and location, striking focus is placed upon startling and confusing imagery; dead donkeys on pianos and corpses buried up to their neck in sand are but a few. But there is something engaging in confusion, in uncertainty and unknowing consciously. The iconic, and much wretched over, eye slicing sequence is juxtaposed with a cloud streaking across a moon. The former hideous, the latter romantic. The film is a riddle. We feel first and think second.

Director David Lynch is a name naturally occurring here as he is perhaps the only apt angle to analyse this film from. Lynch is a director synonymous with wonderful and weird, despite this term being a lazy umbrella characteristic for his work. Dimensions extraneous and unavailable to painting, sculpture and music allow these artists to operate on a level further and deeper beyond narrative. Whether loved or hated, a primal effect is caused. A death’s-head moth or a man shooting dead his doppelgänger generates a reaction deep in the gut, far from the logical mind. 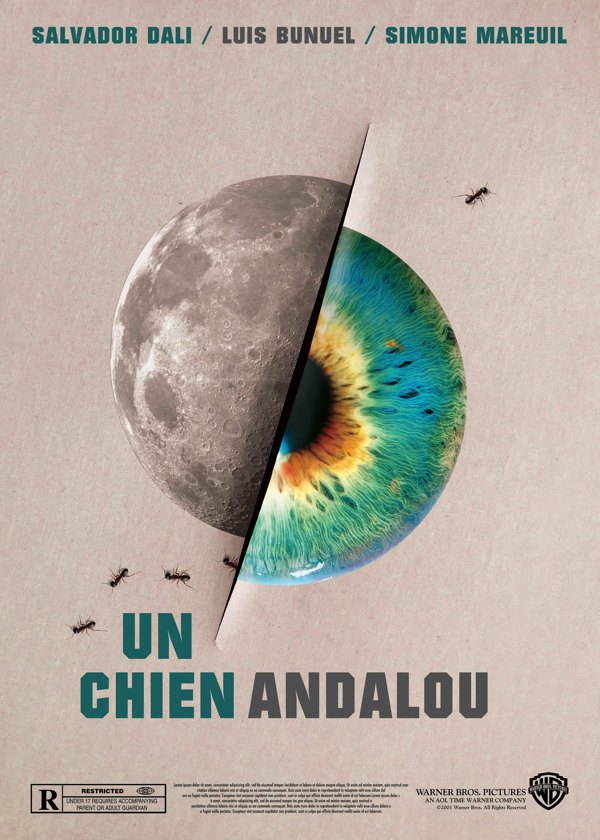 Created at the height of the surrealist movement and voted one of the most dangerous films, Un Chien Andalou is ultimately destined to be forever debated. The strangeness is infinitely relevant and timeless, it will never be understood. But it will forever crawl inside the grand themes of major works, mainstream and otherwise; sex, violence and decay. Though perhaps crudely captured, the film is startling, original and the exordium of a master learning his unique craft.

An unusual film deserves an unusual classic moment. This is not a scene within the film, but rather my favourite of the strange rumours circling the production of Un Chein Andalou. A scene was to be filmed in which gawking pedestrians prodded a severed hand in the road. Dali, unsatisfied with props, frustratedly approached a passerby, whereby he persuaded the man to cut off his hand in exchange for lunch.