The Klondike Gold Rush is a period in American history in which over 100,000 prospectors surged into the frozen tundra of the Yukon to discover their fortunes. They were the brave, the courageous, and the greedy. The Tramp is a category all of his own. A fact immediately apparent as he waddles perilously close to the precipice of a mountain, trousers too baggy, dreams too big and brains too small. So begins an adventure of errors Chaplin wished to be most remembered by. And why not? Gold Rush unearths some of the Auteur’s greatest comedic achievements and heart warming romance. It is the tale of the Little Prospector as he slips and slides through beautiful set pieces on his search for gold, evading a murderer, falling in love, surviving Big Joe’s hunger pangs and clinging to a ledge seconds before a shelter cascades off a mountain. It is the blue print of a classic Chaplin comedy.

The philosophy of Chaplin’s humour is – Make the simple difficult. Attempting to exit a dilapidated cabin becomes a hilarious and arduous task in the capable hands of Chaplin and incapable hands of the Tramp. Blown back by icy winds, the Tramp skids in place despite his best efforts. Again and again he tries and is repeatedly blown out one door before appearing in another. It is exceptionally funny and all the more so because of the difficulty discovered in the everyday. The locations and situations of the Master’s comedies are always fascinating, from fascist Germany to the Circus, but inside remains the relatable which we accomplish with ease and the Tramp does not. In a creaking, run down bar, our hero tries to sneakily pocket a picture of his new love Georgia (Georgia Hale) and pretend to discard it under the unwavering and watchful eye of a bar patron. We relate in the indulgence of the everyday and remain in awe of the grand in The Gold Rush.

Chaplin delights in the tenderness and humour but revels in some of his most extraordinary feats. The infamous sequence of Chaplin and Big Joe going about a morning routine oblivious to the shelter tottering precariously on the edge of oblivion is nothing short of iconic. Chaplin generates laughs and gasps as the two men dangle from a door handle and desperately climb the steepening floor as the cabin remains secured only by a flimsy rope. The stomach muscles tighten with laughter and fear as the Little Prospector survives by a hair of his silly moustache. Chaplin may not pull off the stunts like Keaton, but he knows how to film climatic action. 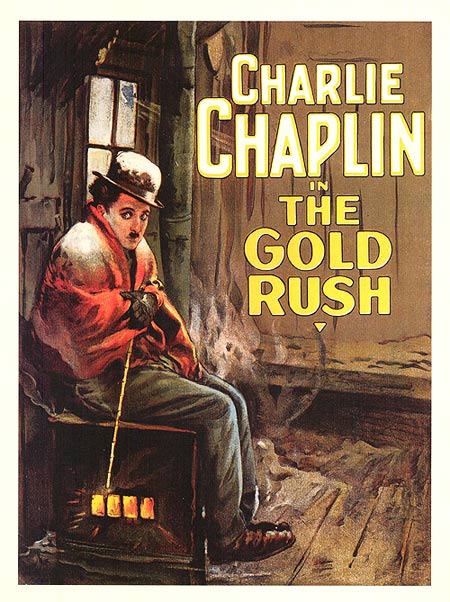 Chaplin guides with such lightness and humour, even in the face of extreme peril, that when mining for sympathy, he knows just the spot to pick at. The innocent romance is touching and Chaplin is a talented actor able to make us laugh and cry. The Tramp’s face crumbling with disappointment as he rings in the New Year on his own is a moment of pathos and tenderness yet it is sandwiched between great laughs. Chaplin is a master manipulator because of a grand talent and a perfect anti-hero to encapsulate the action. The Tramp is by no means an everyman. He is a unique, idiosyncratic being. More hopeless and helpless than the average man. We begin like all the other characters in this piece, laughing at him with pity for faults and trips. But the Little Prospector has a heart set in the right place and follows it inexorably despite the danger and before long earns our love and admiration. It always comes as a wonderful surprise.

A second version of The Gold Rush exists. A re-cut by Chaplin in the 1940s with title cards removed and narration inserted. The narration subtracts nothing from the classic. The Little Prospector and Big Joe chewing on boiled boots and devolving into hunger hallucinations of Chaplin as a giant chicken remains as iconically funny as the beloved original. Though sadly, the final lingering kiss is a casualty. Chaplin and Hale became lovers during the filming of The Gold Rush and the climatic kiss lingered without need for direction. In the re-cut, the relationship was long over and the final heartfelt moment suffered because of it.

Chaplin strikes gold and finds warmth in the frozen tundra of his second masterpiece. Yet another gem in a stellar career of treasures.

The Little Prospector falls asleep at the dinner table. In his dreams, his new friends and love surround him and are having a wonderful time. Too pleased to express himself in a speech, the Little Prospector instead demonstrates his glee in dance. Chaplin grabs two forks and sticks them into bread rolls, he proceeds to dance with his new feet. In words, the humour fails. In practice it is a treasure of silent comedy.